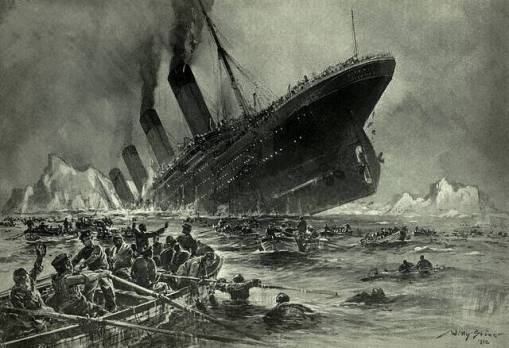 This half-term, Year 2 are learning about The Titanic. They had a school trip to the Sea City Museum and there will also be a dress-up day soon (now where did I put those top hats ..?) So my challenge this week was to introduce some German vocabulary whilst referring to the Titanic disaster. During the previous session we had practiced a couple of simple responses to ‘Wie geht’s dir?‘ (How are you?), so it felt like natural progression to talk about die Gefühle (feelings) this time round. We started off by thinking about different emotions and practiced the German vocabulary with exaggerated expressions and gestures. I then put up different lego smileys on the whiteboard to reinforce the learning. The children found each one absolutely hysterical (which was slightly unexpected!)

We then looked at photos relating to the Titanic (from its launch, departing Southampton, different lasses of passengers, icebergs!, the sinking, crowds waiting for survivors & a group of survivors) and talked about how people might have felt at each point during the tragedy – a further opportunity to practice the vocabulary.

As we were discussing historical events, I took the opportunity to talk about the Berlin Wall. One pupil told us that she had been to Berlin and another pointed out that the wall had come down 🙂 Cosmopolitan and historically aware 6 year olds! As well as looking at photos, I divided the class into 2 with a long piece of string and we discussed how the children might feel if they lived in a divided city, separated from family and friends.

To finish, we sang ‘Wenn du glücklich bist …’ (If you’re happy and you know it …) with appropriate grimaces/gestures and actions for glücklich, traurig, wütend and aufgeregt (happy, sad, angry and excited).

On a related note, I came across an article this week on the importance of tapping into emotions in the foreign language classroom. Not the learning of vocabulary relating to feelings, but getting students to feel emotionally invested in their language learning activities. An example is given of teaching an ‘outrageous’ song to adult learners in the target language as “teachers need the liberty to do unexpected, challenging and funny things”. I hope that I am doing this within the primary classroom and helping to create a life-long love of language learning.

December update: I did this session again with a different Year 2 class and their response to the ‘Berlin Wall’ part was wonderful. After I had separated the class with the piece of string and asked them how they felt about not being able to be with their friends on the other side (angry, sad, frustrated), I took the string away. The whole class immediately came together in a group hug!! 😀

We have been running some German and Spanish sessions at a local infant school, introducing Year 1 pupils to modern foreign language learning. As well as hello a

nd goodbye songs we decided to link in with their current topic which is ‘mini-beasts’. The vocabulary for various creepy crawlies in German, French and Spanish can be found here.

Below are some of our ideas for using ‘mini-beasts’ to teach some German, Spanish and French:

Flashcards and sign language
Choose 6 mini-beasts and create picture flashcards (we used fun cartoon versions, but more realistic images would also be good). Introduce the vocabulary for each of the pictures whilst signing the word. Encourage the children to copy your signs or to make up their own movements, as using gestures helps children remember vocabulary. If you are stuck for inspiration, you could use the signs for the language you are teaching. Signs in many different languages (including British English, German, French and Spanish) are available here.

(I know most classrooms have interactive whiteboards these days, but during one session, the technology failed on us, so I have stuck with low-tech flashcards for these examples :-))

Flashcards and literacy
When introducing the vocabulary for the mini-beasts, hold up a card with the target language vocabulary for each creature, so that the children can see how these new words are spelt. (The Year 1 teachers were keen on introducing elements of literacy as well as oracy into the language sessions). Interesting features can also be pointed out, for example accents, or how to say ‘die’ in German (as opposed to how it is pronounced in English).

Being a bit literal

One way of learning vocabulary is to point out some of the literal meanings of words. For example, slug in German is die Nacktschnecke, which literally translates as ‘naked snail’. In French, a grasshopper is une sauterelle and the verb sauter means ‘to jump’; and similiarly in Spanish it is called un saltamontes, where the verb saltar means ‘to jump’.

Flashcards and movement
Make enough flashcards for the whole class, as well as yourself, (multiple copies of the 6 mini-beasts) and distribute at random amongst the children. Hold up a flashcard and then ask those children also holding that card to stand up/wave/wriggle about like the mini-beast. Second time round, just say the word (no flashcard), using sign language to prompt the children if necessary.

This activity could also be used reinforce the vocabulary for ‘stand up’ and ‘sit down’ (getting the children used to responding to those commands).

Alternatively, if the children have been making mini-beast masks in class, these could be used instead of flashcards. The children could also wear them and practice greeting each other in the target language. (Printable mini-beast masks can also be found easily on the web.)

How many legs?
Introduce numbers and counting by looking at pictures of the following mini-beasts and seeing how many legs they have: snail, ant, spider, woodlouse, caterpillar, centipede, millipede!

Listening
Sections of The Very Hungry Caterpillar can be read out in the target language. This is a useful activity in and of itself, so that the children can listen to long passages read in the second language and enjoy the rhythm and intonation. It is a familiar book with great illustrations so the children can infer meaning from context.

An alternative activity is to ask pupils to listen out for certain words (e.g. die Raupe/la chenille/la oruga) and put up a hand when they hear it. This book is of course also useful for teaching numbers, food and days of the week.

Here is a video of the author, Eric Carle, reading this book in German, his mother-tongue. In French, this story is called ‘La chenille que fait des trous’ and in Spanish ‘La oruga muy hambrienta’.

I hope you find these suggestions useful and let me know if you have any comments!